Every Sunday morning, a very dedicated group of people brings together some of Tasmania’s best producers, value-adders, baristas and buskers to deliver an event that has become part of the Hobart scene - Farm Gate Market.

Sitting and chatting with Madi Peattie, the market’s creator and driving force behind its success, one can’t help but admire Madi’s humble approach, especially considering the Farm Gate Market won the 2015 Tasmanian Tourism Award for ‘Excellence in Food Tourism’. 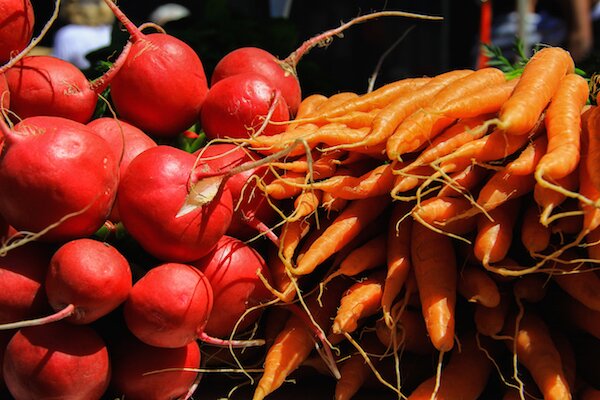 Having started in October 2009, Farm Gate Market just celebrated six years of operation. As we approach Christmas 2015, Madi has 250 growers and suppliers on her list of rotating stallholders producers, with 80 stalls available each Sunday. The easy way to manage this growth would be to push up the stallholder numbers but this isn’t Madi’s style.  Preferring to maintain the market’s principles, Madi notes, “Fresh produce has to be 100% Tasmanian and the core ingredient of artisan foods must be 100% Tasmanian unless a key ingredient like coffee beans is not produced here. The producer of the product must be present at the market; value-add products will never dominate”.

“We need to have enough product mix to make it worth getting out of bed every week. Can we do it in Tassie?” Seasonality is a challenge, with the level of integrity the Farm Gate Market seeks to uphold.

There’s quite a range of distances stallholders drive to attend the Sunday Farm Gate Market.  Some are based in Hobart and others such as Mt Gnomon drive from the North West Coast to attend. 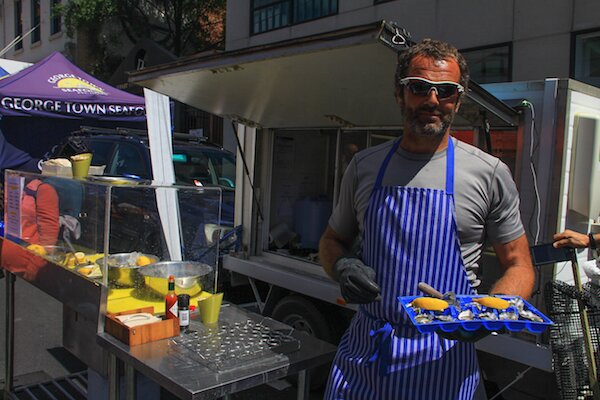 It would be fair to assume Madi was raised on a farming property but having grown up on a small patch near Mountain River with teachers as parents, she doesn’t claim to be a farmer so much as having a genuine connection with regional Tasmania.

“My biggest memories of growing up are the smell of apples and fresh-cut hay.  I have only driven a tractor once and I drove it up a tree!” Madi didn’t choose to expand on this!

“I love Tassie… and I have been round the world four times.  I have hitchhiked the circumference of Australia.  What better place to end up than Tasmania.   I am living in the town I grew up in and married a guy from over on the next hill”.

The guy from “over on the next hill” is Richard.

Every Sunday at 3:30 AM, Richard and Madi (and two children) roll out of bed to commence setup for the market. 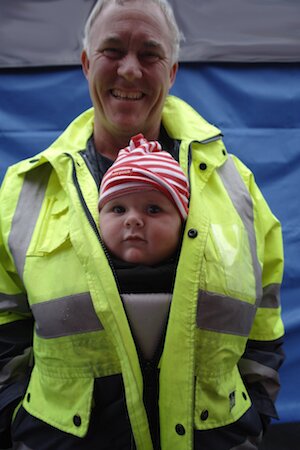 “We wouldn’t be where we are without Richard. I have calculated that Richard has worked two and a half years of full time equivalent since we launched”. By the way, Richard is the state manager for an electrical contracting company. And of the children, “They’re good little market babies… they know where the free stuff is!”

Upon reflection, Madi seems quietly overwhelmed by the support she and Richard have received through their years of operation.  “We couldn’t have imagined these achievements six years ago.  There’s no value you could put on the people who have carried Farm Gate Market since we started”.

When quizzed on her long-term goal for the Farm Gate Market, Madi doesn’t deviate from her altruistic nature. She wants to encourage the next generation of of farmers to come through the ranks and continue to grow top quality produce.

“Small business is my driver. I want to see my producers producing six days a week and selling on the seventh.  We want to see Tassie on the map as a food province in its own right.  That’s our vision”.

At the recent Tasmanian Tourism Awards, Farm Gate Market took home the ‘Excellence in Food Tourism’ award.  Does Madi gloat?  No, she tells us it was nice to see the obvious delight from customers and producers at the market two days later. In fact, she put out a sandwich board at that market saying,  ‘Thanks everyone – it’s your award’.

“Place value on the things you feel in your heart, it’s not about dollars and cents”.

This level of thanks for the market’s supporters extends across all involved.

“I don’t know many capital cities that would allow us to close a main street. The City of Hobart has supported us the whole way – they care more about their city than people realise”.

We had one last question for the ever-energetic Madi and her response was exactly as we hoped.

“Do we have other stuff in the pipeline? Of course!”

When: Farm Gate Market is on Bathurst Street in Hobart (between Elizabeth and Murray Streets) every Sunday morning from 8:30 AM until 1:00 PM.

Our tip: Turn up for opening to hear the ceremonial ringing of the bell to signal opening time.  Trading starts on the chime of the bell and not before!

A Chocolate Lover's Guide To Tasmania