Mark and Margaret Rawlings’ story begins in October 1996 in Western Australia, when they were given a cow as a wedding present. After collecting a few more females, they began to look for a bull to service their growing herd. They purchased a Dexter, and their love affair with Dexter cattle began.

What are Dexter Cattle?

Dexter cattle were highly valued by peasant farmers in Ireland in the 1800’s, because their small stature was perfect for their small tenant farms, and being a hardy animal, they thrived in the tough climate. Worldwide, the popularity had declined by the 1970’s, and the Dexter breed was listed with the Rare Breeds Survival Trust. Placing them on this list enticed interest from around the world, including Australia. As well as being known for their size (standing around a metre tall), the breed are known for their relatively short, broad heads, narrowing towards a wide muzzle with large nostrils. They are a premium animal, with rich milk and lean meat, and a gentle, placid temperament.

Rawlings Dexter Stud was formed in 1997, on 300 acres of land in Southern Brook, Western Australia, to farm a herd of 100 Dexter cattle. They gained a reputation for their quality genetics, showing their cattle at shows, winning awards and they developed a strong demand for their premium, naturally grown beef. After a life-changing event in 2007, Mark and Margaret reevaluated their herd, and they decided to downsize to 24 cattle, and embarked on an adventure to transport the herd across the Nullabor, to Preston, Tasmania.

Preston is a farming community outside of Ulverstone, on the North-West coast. The lush, rich land, with the wet, cold climate is just perfect to suit a Dexter herd. Upon arriving, no worse for wear from their 4,000km journey, the cattle settled in and began    to thrive. With the acquisition of the Kirup Park Dexter Stud in 2010, a herd of Dexter cattle bred by David and Sue Hannaford of Western Australia, Mark and Margaret now have a herd of unique cattle that produces admired bloodlines, quality red and black genetics, and premium quality meat.

A more interesting and dedicated couple you couldn’t find - Mark, with his background of working on farms, and a Diploma in Agriculture, with a Certificate IV in Beef & Rural Business Management, is a teacher in Agriculture at TAFE in Burnie. Margaret has an accounting background, but now is a full time farmer, and has become skilled in animal husbandry, and a specialist in her knowledge of Dexter genetics.

Dexter beef has a finer grained texture than other beef, with incredible marbling, which results in tender cooked beef every time. Highly sought after in the U.K. markets, in Tasmania Dexter beef is usually only found in farmers markets. This is because of the size of the cow – a small breed of cow like a Dexter, will not produce a cut of meat as big as a bigger breed, and supermarkets have no interest in selling a small piece of meat to their customer, despite the quality. But that works out well for the customer, as because the supermarkets choose quantity over quality, there is no middleman between the farmer and the customer when purchasing Dexter beef. Dexter beef can be bought from Preston Gourmet Produce, for the cost of what the customer would have paid at the supermarket. But unlike the supermarket beef, Dexter beef is premium quality, and has extra flavour and taste than other breeds. Many customers say it is the best beef they have ever tasted, and now buy exclusively from Preston Gourmet Produce. 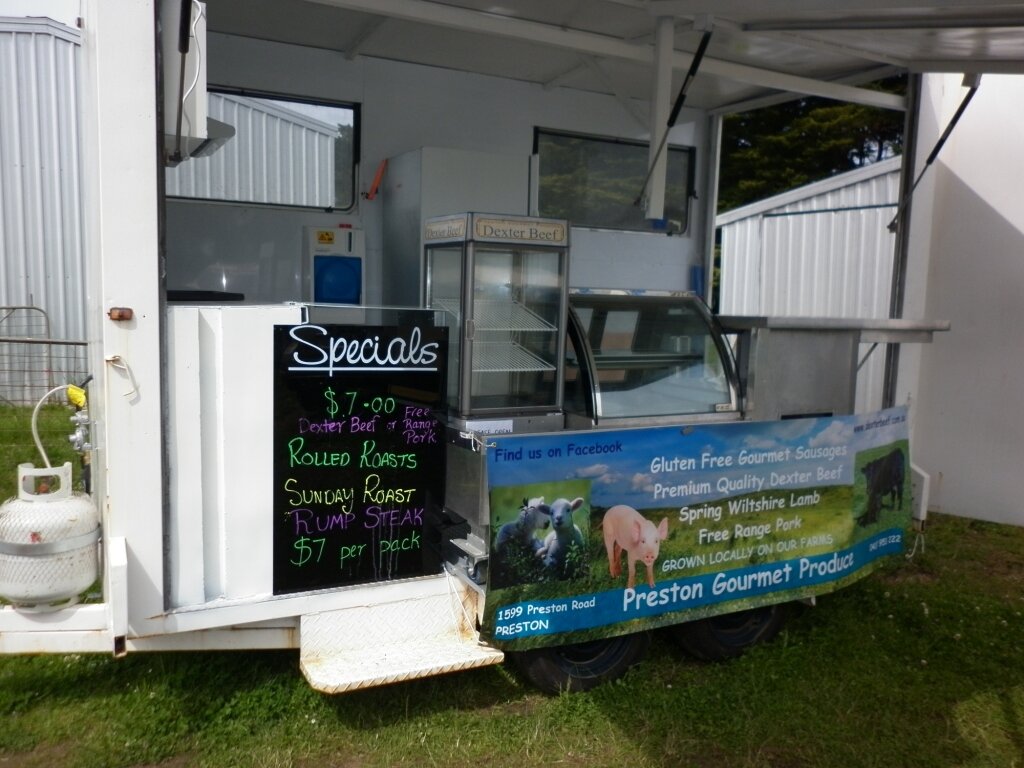 Mark and Margaret established Preston Gourmet Produce, which is an outlet seen at Burnie Farmers Market and Cradle Coast Farmers Market in the North West, made up of locally farmed produce sold direct to the public. Here you can purchase Mark and Margaret’s Dexter beef, gluten free sausages- being able to try before you buy with their cooked gourmet sausage sizzle, gluten free curry and steak sandwiches, as well as local lamb and pork. Mark and Margaret are dedicated to the commercial promotion of Dexter beef, and have introduced their own brand ‘Homegrown Dexter – Five Star Quality Beef’. With the addition of sheep and a small number of pigs to their Preston property, they hope to expand into other quality meats as well.  They are offering boxes of beef - a mixed box of all the favourite cuts for very reasonable prices, delivered throughout Tasmania by refrigerated transport.  In the very near future plans are in the pipeline to launch farm gate sales, which is a customer driven initiative, to provide their product more readily to those who enjoy Dexter beef as much as they do.

A long held dream of theirs has been to establish co-operative marketing model, where other local producers can supply quality product to a local area network, which will distribute fresh produce direct to the customer.  About five Tasmanian Dexter breeders have been supplying steers to the venture which ensures they get maximum returns for their animals and whilst establishing Dexter beef as a sought after commodity.  The returns at sale yards due to the smaller size of the Dexter is only around $1 per kilo and this type of producer direct marketing raises this return to around the $3.60 per kilo.  Their local food hub has recently expanded to include a local sheep producer to provide a consistent supply of lambs year round.  They are always looking for other like-minded producers to provide a diverse range of commodities.

We need to support pioneers like Mark and Margaret Rawlings, and celebrate the quality of local produce that they are introducing into our kitchens. Their story is one of hard work, but what started with one cow in Western Australia, has become a true Tasmanian Success story.

For more information on Rawlings & Kirup Park Dexter Studs or to contact them directly please visit their website at http://dexterbeef.com.au.

Off Center - A New Addition To Launceston's Bubbling Café Scene